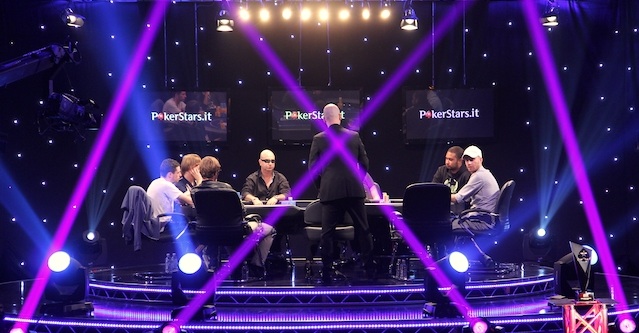 I spent yesterday watching the EPT Final Table with Daragh Davey and Nick Newport. Unfortunately for Jason Tompkins, it wasn’t to be as a combination of factors conspired to eliminate him in 5th. We had the benefit of seeing many of the hole cards throughout the coverage (which was on a one hour delay) and several people asked me afterward how I think Jason played. Firstly, it is important to state that I have only once made a decent sized live final table and I have never even bought into a €5K Event so my opinions are only that of an experienced mid-stakes grinder. That said, I do think it is possible for a lower-tier player to apply his analytical muscles to a bigger game so I gave and would give the following critique.

Jason played superbly. Without knowledge of the hole cards that were folded pre-flop, I cannot comment on his opening ranges but when he was involved, it was entirely correct that he should be. Some might argue that he played too passively in the early going but I 100% endorse this approach as it achieves several objectives. It lowers the possibility of a huge showdown with another big stack, a scenario that would in my mind be an unforgivable ICM punt when there is life changing money on the line. It is deceptive in that it under-represents the value of his hands, induces bluffs and pot controls. It allows Jason to use his post-flop skills against a table of mostly inferior opponents, an area of the game where the pros have their biggest edge. It also sells the story that Jason is playing tight which allows him to get away with some funky moves as demonstrated by his AJo cold 4-bet and his 33 reshove (which got 77 to fold). As per Jason’s likely plan, he would then open up 5-handed and his table-mates would likely lose some equity in the period before they readjusted to his gear change.

As it happened though, there were no early bustouts, the game got shorter stacked, he lost some of his weapons by virtue of having fewer big blinds, there were some miserable ICM implications to him making moves 7-handed as there were two shorties (who kept surviving their all-ins). Then, when he did have an unavoidable showdown, he lost the flip and was on life support for an orbit. AQ came to his rescue but he was still rocking 18-23bbs 6-handed. In this phase, he made some fantastic reads, laying down the worst hand in spots where many would go broke. Sometimes you have to play above the rim just to hang in there and that he did in the hope of a rush.

Disaster then struck as he ran 55 into the shorty’s QQ, a total cooler, and he was back to finding a spot with sub-10bbs. The Button shoved and with 7bbs, Jason had A4o in the BB. Is this a call? It’s close. The Button shouldn’t be shoving any premium hands so I reckon Jason ruled out pairs 99+, AK, AQ and AJs. The likely shoving range thus comprised of 22-88, A2s-A10s, A7-AJ, K9s+, K10+, Q10s+, QJ+, J10s and 910s. Jason needed about 41% to make the call and versus this range he is 43%. While it’s still not a great spot, it’s a spot and with 7bbs, you cannot be picky. As it happened, his Russian opponent was playing weird and had clunkily shoved pocket Kings. Factoring the possibility that the Russian was shoving his entire range, Jason’s decision becomes a clear fold but I don’t think he should feel bad for making that assumption.

Throughout this phase of the tourney, we were in communication with Dara O’Kearney on Skype and we discussed the optimal approach given Jason’s situation. At the time, eventual winner Ludovic Lacay was opening indiscriminately to Jason’s right, meaning he would not get a chance to shove with fold equity (the one opportunity he had, he took, getting 94s through!). Therefore, he would have to take a marginal spot versus Lacay’s range and hope to win at showdown. I argued to Dara that this was one of those situations when you have to take a neutral EV spot and soon to prevent from blinding too low to have a realistic shot at a comeback. Dara argued (and very well I might add) the virtues of waiting as the shorter you get, the more +EV spots become available and in the interim, you might ladder another spot. In a shallow-stacked turbo, I routinely take the line that Dara espoused because I only have to have 20bbs at the end of the tourney to win it. On a deep-stacked well-structured final table, however, I might need 150bbs to win it so I would be less inclined to drop so low.

Neither of these options are ones you relish as a poker player as you struggle to choose between the best of a bad bunch. It’s a bit like my endorsement of Barack Obama in the upcoming US Elections. America has a similarly unclear choice between a right wing lefty and a left wing righty, two incredibly similar centrist politicians who are distinguishable only by the minutia of their policies. Both have flip-flopped, both are disappointments to the people who will vote for them but they are vying for the most important job in the world and I would personally prefer the lesser of two evils in the man who protects the interests of the rich slightly less, protects the rights of women and minorities slightly more, commits terrorist acts after sometimes getting international approval and who doesn’t think Socialism is a bad word. I would reluctantly entrust that person to helm my country’s economic recovery. In the same vain, I, too, would reluctantly call off my 7bb stack with A4 in the hope of igniting a comeback.